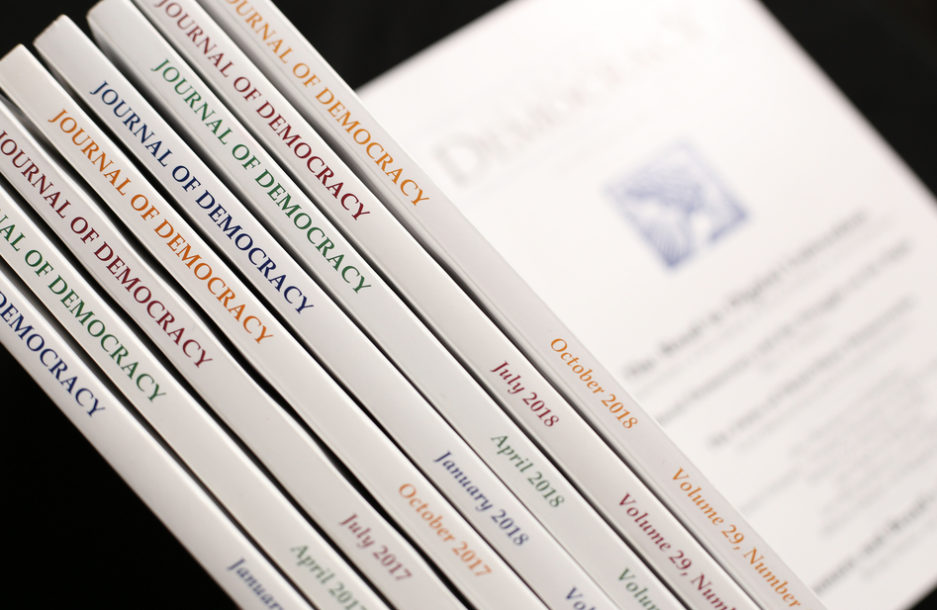 Since its first appearance in 1990, the Journal of Democracy has established itself as a leading voice in discussions of the problems and prospects of democracy around the world. The Journal explores in depth every aspect of the establishment, consolidation, and maintenance of democracy, including political institutions, parties and elections, civil society, ethnic conflict, economic reform, public opinion, the role of the media, federalism, and constitutionalism. It covers not only practical political matters but also questions of democratic theory and culture.

In addition to publishing articles on every inhabited region of the world, the Journal features reviews of important books on democracy, reports on recent elections, excerpts from speeches by leading democrats and democratic dissidents, and news about the activities of pro-democracy groups worldwide.

The Journal’s authors include eminent social scientists and historians, statesmen and leaders of democratic movements, and renowned intellectuals. It is written and edited for the general reader, while maintaining the highest scholarly standards. A truly global publication, the Journal attracts both authors and readers from all over the world. For more information, please visit our website at journalofdemocracy.org.

The Journal of Democracy is published quarterly by the Johns Hopkins University Press in January, April, July, and October. Subscriptions are $50 per year for individuals and $175 for institutions. For further pricing information, including online subscriptions, please visit our website at www.journalofdemocracy.org. To subscribe, visit https://www.journalofdemocracy.org/subscribe/.

Selected essays originally published in the Journal of Democracy have been collected into a series of books edited by Marc F. Plattner and Larry Diamond and published by the Johns Hopkins University Press. Journal of Democracy books and articles are used widely in university courses on political science, international affairs, and sociology. The Journal’s most recent publication, Authoritarian Goes Global (edited by Larry Diamond, Marc F. Plattner, and Christopher Walker), was released in 2016. For the complete list of Journal of Democracy books, please visit https://www.journalofdemocracy.org/books/.

Learn more about the Journal of Democracy.