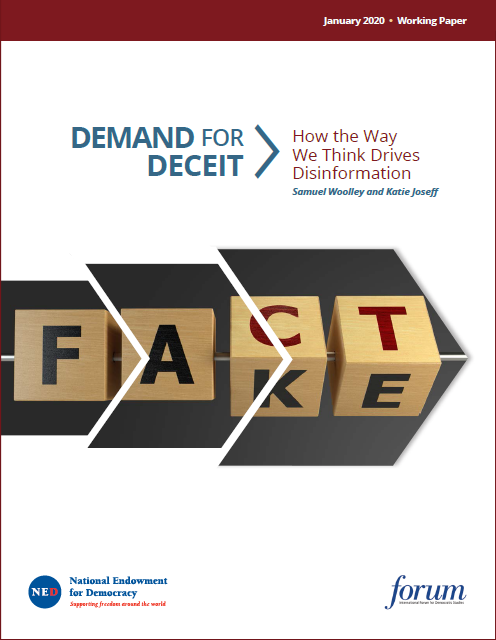 Demand for Deceit: How the Way We Think Drives Disinformation, authored by Samuel Woolley and Katie Joseff, is a working paper produced by the National Endowment for Democracy’s International Forum for Democratic Studies.

This publication is part of an International Forum working paper series, examining the dynamics and impact of resurgent authoritarian influence in the era of globalization, including through networked transnational kleptocracy and manipulation of the global information space. For more on these themes, visit the Forum’s blog, Power 3.0: Understanding Modern Authoritarian Influence, and its related podcast.

With the advent of digital communications, the rapid spread of political disinformation—the purposeful use of misleading or manipulative information to subvert political discourse and confuse, divide, or otherwise negatively influence publics—has become a vexing challenge for societies worldwide. While political actors have used rumor, incitement, and falsehood as tools since time immemorial, modern technologies allow them to produce and disseminate disinformation at a scale never before seen. The effect has been to blanket the wider information space in confusion and cynicism, fracture democratic societies, and distort public discussion.

Initial assessments of the problem focused on how technological advancements in connectivity have enhanced the reach, speed, and magnitude of disinformation. As a result, the first wave of responses to the challenge was therefore based on the supply of disinformation, and often emphasized fact-checking, debunking, and counter-narratives.

This report focuses on demand for disinformation. While some consumers are exposed to and perhaps influenced by disinformation incidentally, others repeatedly seek out and believe sources of disinformation while rejecting other information sources. Why?

As concerns about computational propaganda and disinformation have rocketed to the top of public agendas, this important question has received greater attention from researchers, policymakers, and civil society. The answer is tied in part to the psychology of news consumption and opinion formation. The lion’s share of research has focused on the United States and Europe, but demand-side factors drive the spread and consumption of disinformation around the world. Understanding these factors is crucial for informing effective responses—especially as near future technologies may hold the potential to make these forms of information manipulation even more effective.

Just because the effectiveness of disinformation may be tied to innate aspects of human psychology does not mean that democratic societies are powerless to respond. Rather, civil society, journalists, and other stakeholders invested in the freedom and openness of the global information space should develop innovative adaptations to the contemporary, disinformation-rich information landscape by bearing in mind key insights from the “demand” side of this challenge:

Although democratic societies may have underestimated the complexity that demand-side drivers pose, it is important not to panic. This challenge can be met, but doing so will require more research on behavioral change as it relates to digital disinformation, and more work illuminating why people spread novel forms of disinformation. Undoubtedly, the “supply” side of disinformation continues to warrant both empirical research and investigative journalism. Curbing the worst effects of disinformation will also require a better understanding of demand.

View
Forum Q&A: Nick Mathiason on the Future of Investigative...

Digital Migration and the Democratization...

Dataphyte is a unique data journalism platform that...