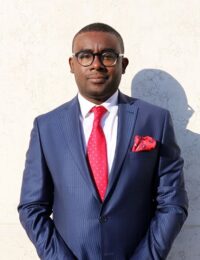 Toxic Ideologies: How China is Shaping Politics in the Republic of the Congo

Mr. Andrea Ngombet is the founder of the Sassoufit Collective, a Paris-based organization advocating for democracy, human rights, and anti-corruption in the Republic of the Congo and elsewhere in Africa. He is the author of several opinion papers and investigations on China’s influence in Africa and transnational kleptocracy, whose work has appeared in international journals and news outlets, including the New York Times, Le Monde, Liberation, Der Spiegel, and the Guardian. In addition to his work with Sassoufit, Mr. Ngombet contributes to other projects advocating for human rights and democracy in the Congo, including the Ras-Le-Bol citizen movement, the Africtivist League, Central African Coalition against Kleptocracy, and the International Coalition for Democratic Renewal. Owing to his outspoken activism, Mr. Ngombet was the target of physical attacks and death threats in his home country and forced into exile in France. During his fellowship, he worked on an essay on how the Maoist ideology shapes modern politics in the Republic of Congo. As part of his research and writing, he traced the historical origins of political intolerance and the People’s Republic of China’s influence on the Republic of Congo.