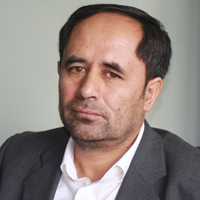 Mr. Azizullah “Aziz” Royesh is the founding principal of Marefat High School, based in Kabul. Founded in 1995 as an educational institution for Afghan refugees in Pakistan, the Marefat School moved to Afghanistan in 2002 and went on to achieve international recognition for its curriculum promoting critical thinking and civic education and its commitment to equal access to education. Within the Marefat community of students, alumni, and teachers, nearly 50 percent are women. Mr. Royesh has authored textbooks on humanism, human rights, democracy, and Quranic interpretation. With his colleagues, he also established the Marefat Civil Capacity Building Organization, which has worked to strengthen democracy and civic norms. Mr. Royesh was named a Yale World Fellow in 2010 and served as a 2011 Reagan-Fascell Democracy Fellow at the National Endowment for Democracy, where he worked on his memoir, Let Me Breathe. He is the recipient of numerous other awards, including, most recently, the 2020 CW4WAfghan Champion of Education award. In 2014, he was a top-ten finalist for the Varkey Foundation’s Global Teacher Prize. Forced to evacuate Afghanistan following the Taliban takeover earlier this year, Mr. Royesh plans to devote his Visiting Fellowship to developing institutional partnerships in support of scholars, practitioners, and students displaced by the crisis in Afghanistan. He will also begin a book manuscript on the resumption of power by the Taliban, the apparent eradication of two decades’ worth of achievement, and an analysis of how to foster democracy in these dark times.