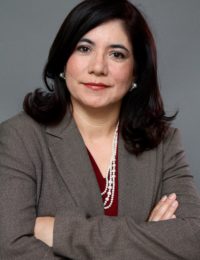 Corruption in the Judiciary: The Case of Guatemala

Judge Claudia Escobar is a former magistrate of the Court of Appeals of Guatemala and a respected legal scholar. Following her second election to the Court of Appeals in 2014, she became the lead whistleblower in a case of grand corruption that revealed illegal interference in Guatemala’s judiciary by high-ranking political officials including the country’s vice-president and the former president of congress. She is also the founder of the Judiciary Institute and Asociación FIDDI, two organizations dedicated to promoting the rule of law in Guatemala. Following a series of threats that she received for speaking out against corruption in Guatemala’s judiciary, Judge Escobar left with her family for the United States in 2015 to continue her legal work and advocacy for judicial independence. She spent the 2015–2016 academic year at Harvard University as a Scholar at Risk Fellow at the Radcliffe Institute for Advanced Study. During her fellowship at NED, she is examining the impact of international institutions on the fight against corruption in Guatemala.

Mr. Rafael Marques de Morais is a journalist and human...

A Civil Society Perspective on...