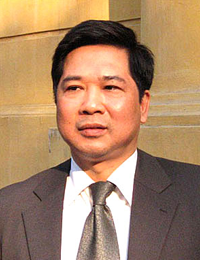 Dr. Cu Huy Ha Vu is a leading constitutional scholar and legal advocate who has written widely on civil and political rights in Vietnam. Through a law firm established with his wife, Attorney Nguyen Thi Duong Ha, a leading human rights defender in her own right, Dr. Vu has challenged the ruling Communist Party’s monopoly over power and has encouraged citizens to stand up against the government’s unlawful acts. Most notable were his two lawsuits against Vietnam’s prime minister, his legal representation of disenfranchised communities and indigenous peoples, and his articles on human rights, territorial sovereignty and integrity, and proposed amendments to the Vietnamese constitution that would introduce a multi-party democratic system. For these activities, he was arrested on trumped-up charges and sentenced in 2011 to seven years’ imprisonment and three years of house arrest. Released in 2014 in the face of mounting domestic and international pressure, he continues to speak out on issues of national and international concern. During his fellowship, Dr. Vu assessed the current state of Vietnam’s democracy movement and the vital importance of promoting human rights and the democratization of Vietnam. He was also a non-residential Visiting Fellow at NED in January and February of 2015.

“Vietnam must stop persecuting human rights as a condition for easing the US embargo,” Voice of America, October 3, 2014 (Vietnamese)

“Vietnam and the United States: Past as prologue,” The Economist, October 11, 2014

“Implementing Human Rights as a Path to Democracy in Vietnam,” National Endowment for Democracy, December 11, 2014