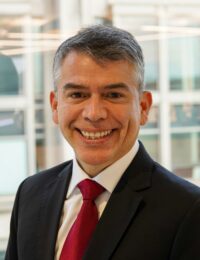 Assessing the Impact of Macroeconomic Instability on Democracy in Latin America

Dr. Julio Guzman is a Peruvian politician and founder of a centrist political party, Partido Morado. A presidential candidate in 2016 and 2021, he was deemed ineligible to compete in the earlier election on technical grounds believed to be motivated by political partisanship. From 2011 to 2013, he served in government as vice minister of micro- and small enterprises and as secretary general of the presidency of the Council of Ministers of Peru, respectively. In addition, Dr. Guzman has held positions at Deloitte and the Inter-American Development Bank. He holds a Ph.D. in public policy from the University of Maryland and a master’s degree in public policy from Georgetown University. He teaches part-time at Princeton University and has served as an adjunct professor at the University of Maryland and Georgetown University. During his fellowship, Dr. Guzman is conducting research and writing on the impact of macroeconomic instability on democracy in Latin America, as well as the role of Chinese influence in the region. He is also exploring prospects for the development of a Center for Latin American Leadership, an academy that would seek to educate and inspire a new generation of leaders committed to the deepening of democracy across Latin America.