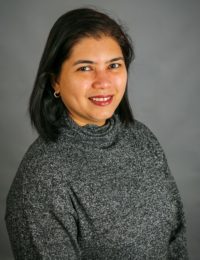 Ms. Elsa Marie D’Silva is the founder and chief executive officer of the Red Dot Foundation, a Mumbai–based organization that works to end violence against women.  She is also the innovator of Safecity, an online platform developed by Red Dot Foundation that uses crowdsourcing to track reports of sexual violence and harassment in public spaces and maps this data to show unsafe areas in cities.  Since launching Safecity in 2012, Ms. D’Silva has overseen the platform’s rise to become the largest crowdsourcing app on the issue in India, Kenya, Cameroon, and Nepal.  For her pioneering work in addressing gender-based violence, Ms. D’Silva received the 2013 Digital Women in Social Impact Award from She The People, the 2015 Female Entrepreneur of the Year Award from Dusan Stojanovic, the Government of India’s 2016 #WomenTransformingIndia award, and Vital Voices’ 2017 Global Leadership Award.  In 2015, she was listed as one of BBC Hindi’s Top 100 Inspirational and Influential Women.  During her fellowship, Ms. D’Silva drew upon her experience with Safecity to explore how to expand the reach of the application to other countries around the world.  She also drafted a handbook concerning the power of digital technology to address gender-based violence worldwide.