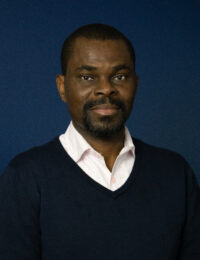 Dr. Emeka Umejei is a media scholar whose research focuses on Chinese media and Chinese digital infrastructure in Africa. He has taught at institutions across the continent, including the University of the Witwatersrand in South Africa, the American University of Nigeria, and the University of Ghana. He has also held research positions at the University of Duisburg-Essen and the University of Tubingen in Germany. His book Chinese Media in Africa: Perception, Performance, and Paradox (2020) received wide acclaim. Prior to entering academia, Dr. Umejei served as an investigative journalist for several years, writing for leading newspapers in Nigeria, including the Independent and Leadership. He also served as an African correspondent for U.S.-based media outfit LNG Publications. For his dedicated reporting, he was nominated for the Wole Soyinka Award for Investigative Journalism in 2009 and the Power Reporting Nigeria Media Merit Award in 2011. During his fellowship, Dr. Umejei is analyzing the impact of the Belt and Road News Network as a vehicle for the influence operation of the Chinese party-state over African media development. He will document his findings in a report and publish a blog on Chinese influence over African media and its implications for democracy across the continent.