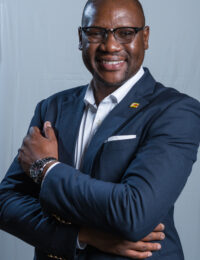 Mr. Evan Mawarire is a Zimbabwean pastor and civil rights activist. He is best known as the founder of the #ThisFlag peaceful protest movement, which utilized the Zimbabwean flag as a symbol of national pride in a social media campaign to ignite public demand for accountability of the government’s widespread corruption and abuse of office. #ThisFlag was instrumental in the protests that led to Robert Mugabe’s resignation. Mr. Mawarire’s work has attracted international attention: Foreign Policy named him one of the 100 global thinkers of 2016, and South Africa’s Daily Maverick newspaper named him the 2016 African Person of the Year. In addition to holding fellowships at Stanford University and Yale University, Mr. Mawarire has addressed audiences at The Atlantic Council, Harvard, Oxford Union, Oslo Freedom Forum, and Geneva Summit. As a result of his work, Mr. Mawarire was imprisoned and tortured in 2016, 2017, and 2019 and charged with treason facing 80 years in prison. During his fellowship, Mr. Mawarire will produce a book that uses the story of his personal encounter with the Mugabe regime as a means of empowering ordinary citizens with the tools and knowledge they need to participate meaningfully in building a genuine democracy.