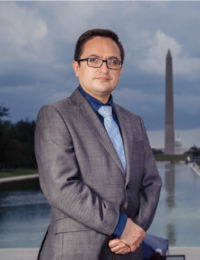 Mr. Juan Francisco Sandoval is an internationally recognized anti-corruption advocate who was, most recently, head of the Guatemalan Special Prosecutor’s Office Against Impunity (FECI). He has worked for eleven years at FECI, having joined as an assistant prosecutor in 2009, and most recently assumed the role of director in 2015. Mr. Sandoval’s work was crucial to exposing and holding to account numerous corrupt public and private officials, including the exposure and prosecution of many key figures behind La Linea, a network of high-ranking Guatemalan politicians and government officials who orchestrated a customs corruption scheme. This case ultimately led to the resignation and arrest of Guatemala’s president and the resignation, arrest, and subsequent conviction of the vice president. Mr. Sandoval was fired from his position by the Guatemalan attorney general in 2021 and has faced numerous threats to his life for his anticorruption work, forcing him into exile in the United States. The Department of State awarded him an “International Champion Against Corruption” award in 2021. During his Visiting Fellowship, financed in part by the Carl Gershman Fund for Democrats at Risk, Mr. Sandoval will be based at the Due Process of Law Foundation, Washington, D.C., as his primary site of activity. There, he plans to conduct a study of the impact of corruption on human rights and civil society in Central America, develop recommendations based on his experience, and provide technical expertise to civil society groups and legal actors seeking to expose, investigate, and litigate corruption in the region.