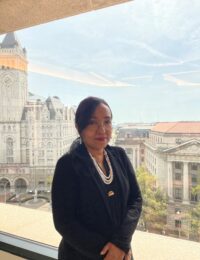 Ms. Khin Lay is a Burmese civil society leader, women’s rights advocate, and pro-democracy activist. She is the founding director of the Triangle Women’s Organization (TWO), an organization working at the grassroots level to advance women’s leadership in the political sphere and eliminate gender-based violence. In addition, Ms. Khin Lay is chair of the Access to Justice Initiative (A2JI), an advocacy platform combating systemic corruption in the country. She has been featured on panels representing Burmese civil society with President Obama and has briefed high-ranking U.S. officials since 2012, including Secretaries of State Clinton, Kerry, and Blinken, President and First Lady Bush, and Ambassador Rice. Before establishing TWO, Khin Lay was the leader of the Kamaryut Women’s Wing of the National League for Democracy (NLD).  For her activism, she was tortured and jailed by the military dictatorship in the notorious Insein prison in 2000. Despite this, she remained active in the pro-democracy movement and in the women’s rights space, experiencing continued intimidation and surveillance. During her fellowship, Ms. Khin Lay plans to advocate for a return to democracy in Burma and raise awareness of ongoing human rights abuses taking place under the current military junta.