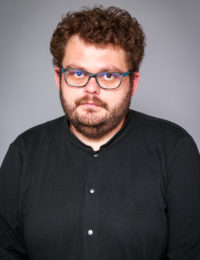 Using Creative and Multimedia Tools to Promote Peace and Reconciliation in Post-Conflict Societies: The Case of Srebrenica

Mr. Andrej Nosov is a political activist and artist who uses a variety of media to engage the public in the politics of memory, transitional justice, and the rights of marginalized communities. In 2003, he founded the Youth Initiative for Human Rights (YIHR), a Belgrade-based NED grantee with offices throughout the former Yugoslavia. During his tenure at YIHR, Mr. Nosov coordinated more than 70 projects on youth mobility, war crimes, and justice. He subsequently established Heartefact Fund, a regional Balkan foundation utilizing philanthropy and the arts to raise awareness and engage the public on issues of human rights and reconciliation. Named one of NED’s “30 Under 30” in 2013, he currently serves as creative director of the Heartefact Fund, with a focus on developing international projects and outreach. He is also active in theater, producing his own plays and directing dramatic works concerned with marginalized communities and post-conflict reconciliation. During his fellowship, Mr. Nosov is developing a multimedia platform that will foster dialogue and engage a new generation of Serbian citizens in political exchange.

Mr. Kwami Ahiabenu is founder and president of the...

View
The Promise of Rural Journalism in Guatemala’s Fragile Democracy

Based in Guatemala as a journalism trainer...