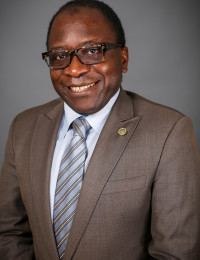 Social Media and Support for Free Speech and Democracy

Mr. Elie Smith is a Cameroonian journalist, reporter, and translator who has worked with a number of Central African and French media outlets, including Télésud, France 24, Canal France International, and Radio France International.  He served most recently as director of the MNTV television station in Congo-Brazzaville, in which capacity he encouraged the practice of investigative journalism and helped promote free speech by providing a safe space for politicians and civil society activists to express their views.  His work in support of freedom of expression and anticorruption has earned him recognition as Best TV Reporter in Congo-Brazzaville (2014), but has also led to reprisals against him and his family.  During his fellowship, Mr. Smith is exploring the influence of social media on the consolidation of free speech and democracy in Central Africa, with plans to work on a book manuscript documenting his experience as a journalist in the region.

“Distorting the News in Africa: How Dictators Have Tried to Shape the Media Landscape to their Liking,” Center for International Media Assistance, June 28, 2016.

In this episode of Democracy Stories, Olang Sana of Citizens Against Violence...

A Civil Society Perspective on...