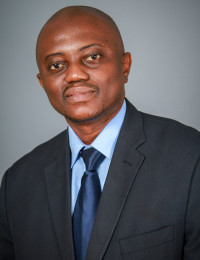 Strengthening Democracy in Liberia through Public Access to Information

Mr. Lamii Kpargoi is a civil society activist, journalist, and lawyer, who currently serves as officer in charge of the Liberia Media Center, where he works to foster transparency and bolster media capacity through trainings and research. In 2015, he co-founded the Justice Initiative in response to Liberia’s chronic criminal justice administration problems, and also helped to launch Volunteers for Change, an initiative geared toward transforming Liberian political culture. He has authored a number of publications on the media, including Opinion and Attitude Study on Access to Information, Media Consumption, & Communication Environment in Liberia, as well as IREX’s Liberia Media Sustainability Index.  During his fellowship, Mr. Kpargoi is examining how freedom of information legislation is implemented in the United States, with an eye toward strengthening public access to information in Liberia. He plans to draft a set of policy recommendations concerning Liberia’s Independent Information Commission, as well as guidelines for civil society organizations and the general population on how they may exercise their right to access information, as defined under Liberian law.

“Talking the Talk but Failing to Walk the Walk: The Liberian Government’s Freedom of Expression Problem,” Center for International Media Assistance, February 25, 2016.

National Endowment for Democracy, “Freedom of Information as a Catalyst for Liberia’s Democratic Growth,” January 14, 2016.

Abdelrahman Mohamed Al Gasim is a co-founder of the Darfur Bar Association...

The Center for Civil Liberties joins...

The Difficult Road to Transparency...

Honoring the Life and Legacy of...