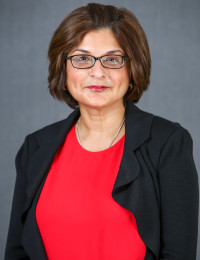 Ms. Farahnaz Ispahani has been a leading voice for women and religious minorities in Pakistan for the past twenty five years, first as a journalist, then as a member of Pakistan’s National Assembly, and most recently as a scholar based in the United States. An advocate of Pakistan’s return to democracy during the military regime of Pervez Musharraf, she served as a spokesperson and international media coordinator for the Pakistan People’s Party, working alongside the late Benazir Bhutto. During her tenure in parliament (2008–2012), she was a member of the Human Rights Committee and the Women’s Parliamentary Caucus. In 2013–2014, she served as a Public Policy Scholar at the Woodrow Wilson International Center for Scholars, where she completed a book on the persecution of religious minorities in Pakistan. In 2012, she was listed among Foreign Policy magazine’s Top 100 Global Thinkers, as well as Newsweek Pakistan’s Top 100 Women Who Matter. During her fellowship, Ms. Ispahani is exploring women’s political participation in the Muslim world, both in terms of their progress toward gender equality under democratic systems and the converse rise of women as agents of extremist propaganda within the world of the Islamic State.