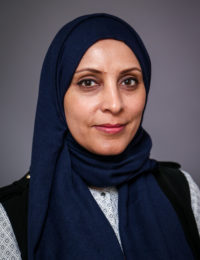 Tackling the Predicament of Civic Education in Religious Societies

TACKLING THE PREDICAMENT OF CIVIC EDUCATION IN RELIGIOUS SOCIETIES

Ms. Hajar Al-Kuhtany is executive director of the International Forum for Islamic Dialogue (IFID), a London-based NED grantee organization that holds workshops and fosters dialogue on issues relevant to Muslim communities around the world. She is also co-founder and chair of SN21, an Amman-based youth-empowerment organization that mentors young leaders throughout the region. As a master trainer and course developer, she organizes civic education programs that have reached more than 20,000 Arab youth throughout the Middle East. In addition, she serves as editor of Enlightened Monitor, a periodical published by IFID. While working in the Iraqi prime minister’s office in 2004–2007, she witnessed the country’s descent into violence and left Baghdad convinced that democracy starts at the local level. Her involvement with youth groups preceded and accompanied the turbulent transitions of the Arab Spring, giving her firsthand exposure to the challenges that face democracy in traditional social settings. During her fellowship, Ms. Al-Kuhtany is examining how traditional Muslim worldviews influence the perception of democracy in the Middle East and how civic education programs, especially youth-based ones, are used to strengthen democratic values.