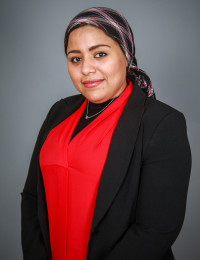 Ms. Hend Nafea is an Egyptian human rights advocate who serves as executive director and co-founder of the U.S.-based NGO Human Rights Port, an organization working to provide support and protection for human rights defenders and civil society activists in Egypt and the greater MENA region. She is also the co-founder of Watan Bila Ta’azib (‘A Nation Without Torture’), a campaign that seeks to bring an end to torture in Egypt. As a journalist, she reported on the anti-government demonstrations carried out by laborers and other social groups not covered by mainstream media. For her participation in the 2011 uprisings against former president Hosni Mubarak, she was arrested, tortured, and later sentenced in absentia to 25 years in prison. She has been profiled in the New Yorker, the New York Times, and in the 2015 documentary feature film The Trials of Spring. During her fellowship, Ms. Nafea is identifying the specific needs of at-risk human rights defenders in Egypt to better equip international donor organizations to design effective forms of support.

“Women continue to fight for human rights in Egypt,” The MFJS Reporter, October 29, 2015.