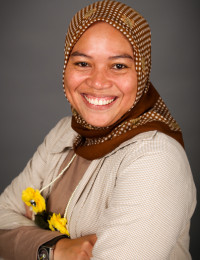 Strengthening Trade Unions in Indonesia: A Manual on Strategic Organizing

Ms. Izzah Inzamliyah is a program officer with the Solidarity Center in Jakarta, where she designs and facilitates workshops for local unions on public policy advocacy and lobbying, increasing membership, and promoting gender mainstreaming. As program officer, she also played a leading role in encouraging unions to advocate for labor issues during Indonesia’s 2004 and 2009 elections. Inspired by her experiences as a sewing machine operator at a garment factory in Jakarta in the early 1990s, she went on to become secretary of its trade union, where she overcame intimidation tactics in successfully negotiating the factory’s first collective bargaining agreement and implementing a 30 percent quota for women in union leadership. During her fellowship, Ms. Inzamliyah plans to draft a manual for use in union trainings on strategic organizing and workers’ human rights, drawing on the democratic principles of representation, participation, and accountability. She plans to draw comparisons and lessons from the history of the U.S. labor movement, with a particular focus on service employees’ unions.

The Chinese Communist Party at...

View
Foreign Policies of Emerging-Market Democracies: What Role for Democracy and Human Rights?

Toward a Common Democratic Agenda:...

Satu Limaye was named director of the East-West Center...