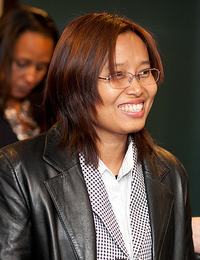 Ms. Zin Mar Aung is co-founder of RAINFALL, a Yangon-based organization that empowers women in Burma through human-rights trainings and awareness-building at the community level. A former prisoner of conscience, she was arrested in 1998 for participating in the student-led democratic uprisings against Burma’s military regime and released eleven years later. In 2009, she formed a self-help group for ex-political prisoners and co-founded the Cultural Impact Studies Club to promote the idea that democracy is compatible with Asian culture. In 2011, she co-founded the Yangon School of Political Science, a NED-funded institution that educates young activists in the values of democracy. For her efforts to strengthen women’s rights, democratic values, and conflict resolution in Burma, she was awarded the International Women of Courage Award in 2012 by then–Secretary of State Hilary Clinton. During her fellowship, Zin Mar Aung is developing a roadmap for women’s political empowerment in Burma, with recommendations for how women may participate effectively in political life. She is also producing a training manual as a resource for women’s organizations in Burma.

“US Must Address Rights Concerns Before Further Engagement,” The Irrawaddy, November 13, 2014.

“Me and My Political Belief,” Eternal Light Magazine, February 6, 2015. (Burmese)

Foundation for a Just Society, “Myanmar: An Unequal Transition,” November 20, 2014.

Congressional briefing with USCIRF, “The Ongoing Abuses Against Religious and Ethnic Minorities,” December 3, 2014.