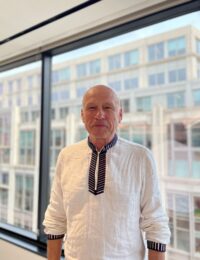 Mr. Oleh Rybachuk is a prominent civil society leader and former politician. He is the founder of the Centre of United Actions, a Ukrainian NGO that promotes democratic change through analysis of state and local policymaking and citizen engagement in the policy process. In 2011, he played a significant role in the emergence of the CHESNO movement, which promoted the advancement of fair election processes through critical evaluation of Ukrainian legislators. Prior to his work in civil society, Mr. Rybachuk was a public servant for several years. In 2005, he served as Ukraine’s deputy prime minister on European integration and was appointed secretary of the Political Council in 2006. From 2005 to 2006, he served as chief of staff to Ukrainian president Viktor Yushchenko. During his fellowship, Mr. Rybachuk is gathering accurate and timely information on the situation in Ukraine and disseminating that information as widely as possible to inform the public about the war. He is also working to amplify the voices of ordinary Ukrainians under attack as a call to action to the international community.