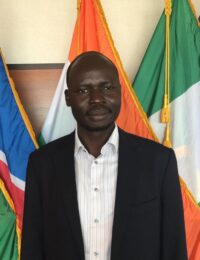 Dr. Peter Biar Ajak is a prominent civil society leader, political dissident, and scholar from South Sudan. He is the founder of the Juba-based Center for Strategic Analyses and Research, chair of the South Sudan Young Leaders Forum, and senior advisor to the International Growth Centre, an economic research center based at the London School of Economics. Previously, Dr. Ajak served as an economist with the World Bank and as coordinator of policy and strategy in the Office of the Minister of National Security in the Office of the President of South Sudan, where he contributed to plans for the political and economic development of the country. An outspoken advocate for free and fair elections, Dr. Ajak was convicted of disturbing the peace and jailed for eighteen months in South Sudan’s notorious Blue House prison. Facing death threats upon his release, he was forced to seek safe haven in the United States, where he continues to advocate for democracy back home. During his fellowship, Dr. Ajak will engage the South Sudanese diaspora in a series of discussions regarding democratic prospects in South Sudan, drawing upon his findings to write a series of op-eds. He will also work on a book manuscript analyzing the reasons for South Sudan’s stalled democratic transition.