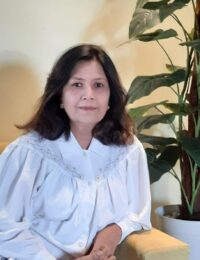 Judge Swati Chauhan is a member of the Indian judiciary who has dedicated her career to combating human trafficking in India. She served as the first magistrate of Mumbai’s specialized court for cases under the Immoral Trafficking Prevention Act, in which role she adjudicated individual cases before her and demonstrated the police linkages between cases, which led to the arrests of numerous trafficking kingpins. In 2011, the U.S. Department of State honored her with its Trafficking in Persons Report Hero Acting to End Modern Slavery Award, given to individuals around the world who have devoted their lives to the fight against human trafficking. She has written about the legal framework preventing human trafficking for the edited volume Human Trafficking: The Stakeholders’ Perspective (2013) and has spoken about her work at national and international conferences. During her fellowship, Judge Chauhan plans to develop a curriculum to educate school-age children on the signs and dangers of human trafficking, with the goal of giving youth the tools and strategies they need to recognize exploitation and seek protection against the scourge of modern-day slavery.