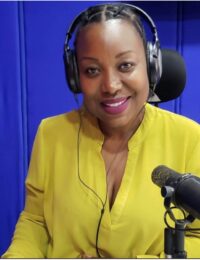 Ms. Violet Gonda is president of the International Association of Women in Radio and Television. An award-winning freelance political and human rights journalist based in the United Kingdom, she has, for two decades, helped to develop and implement communications campaigns, including setting up a privately owned start-up satellite radio station in Zimbabwe, broadcasting from London. In 2002, Ms. Gonda became one of six co-founders of SW Radio Africa, which made bold moves to provide alternative ways to circumvent state censorship in Zimbabwe while reporting from London. Shortly thereafter, she was banned by the government from returning to Zimbabwe. After almost two decades in forced exile, Ms. Gonda briefly returned to Zimbabwe following the fall of President Mugabe in late 2017, to report on political developments. While there, she hosted presidential and parliamentary election debates and co-produced an investigative documentary, “Ballots then Bullets,” which explored election irregularities and electoral violence in 2018. During her fellowship, Ms. Gonda will document the appropriation of hybrid media in the fight against competitive authoritarian regimes, using Zimbabwe as a case study. She will further outline the role of alternative media in the struggle for social justice and the attacks that journalists face in response to their work