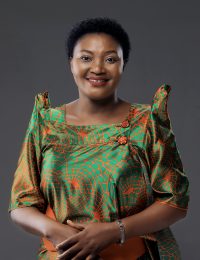 Ms. Winnie Kiiza is a prominent political figure and democracy advocate, who has served most recently as Uganda’s first female Leader of the Opposition in parliament (2016–2018). A member of the country’s main opposition political parties, the Forum for Democratic Change and the Alliance for National Transformation, she has represented the Kasese district since 2006. As chairperson of the Parliamentary Committee on Government Assurances and the Parliamentary Committee of Local Government, she has worked closely with civil society organizations under the Black Monday Movement to fight corruption in the country. In a striking departure from custom, she opted not to seek reelection when her term ends in May, believing that leaders should avoid overstaying in office and instead make room for a new generation with fresh ideas. Ms. Kiiza has been an outspoken critic of the Museveni regime, campaigning against the removal of the age limit for the presidency and seeking justice for the killing of civilians by Ugandan security forces at the Kasese palace in 2016. Owing to her advocacy for democratic change and rule of law, Ms. Kiiza, her family, and her staff have been the target of state-sponsored violence and intimidation, including several attempted and successful kidnappings and extrajudicial detentions. Stepping down from elected office, Ms. Kiiza devoted her fellowship to a comparative study of countries with strong democratic values and institutions. In addition, she laid the groundwork for the development of a leadership academy intended to educate Ugandan youth concerning the values, institutions, and practices of democracy.