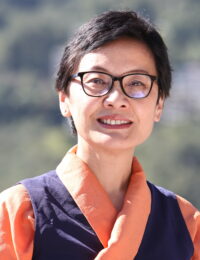 Ms. Youdon Aukatsang is serving her third term as an elected member of the Tibetan Parliament-in-Exile, working on issues relating to women, youth, human rights, and international relations. She is also the founding director of Empowering the Vision Project, an organization that seeks to empower Tibetan youth. Through workshops and conferences, she has sought to establish a role for civil society in supporting the Tibetan community and leadership development for youth. Her article, “The Challenge of Nation-Building in Exile,” appeared in the July 2019 issue of the World Focus Journal. During her fellowship, Ms. Aukatsang identified ways to increase the effectiveness of the Tibetan Parliament-in-Exile through a comparative assessment of the U.S. and Tibetan legislatures. She engaged with members of the Tibetan diaspora, including community leaders, to hear their opinions on how to improve the legislative body and strengthen democratic institutions in exile. She shared her findings and recommendations with the Office of His Holiness the Dalai Lama, the Central Tibetan Administration, the Tibetan Parliament-in-Exile, and the Tibetan community at large.