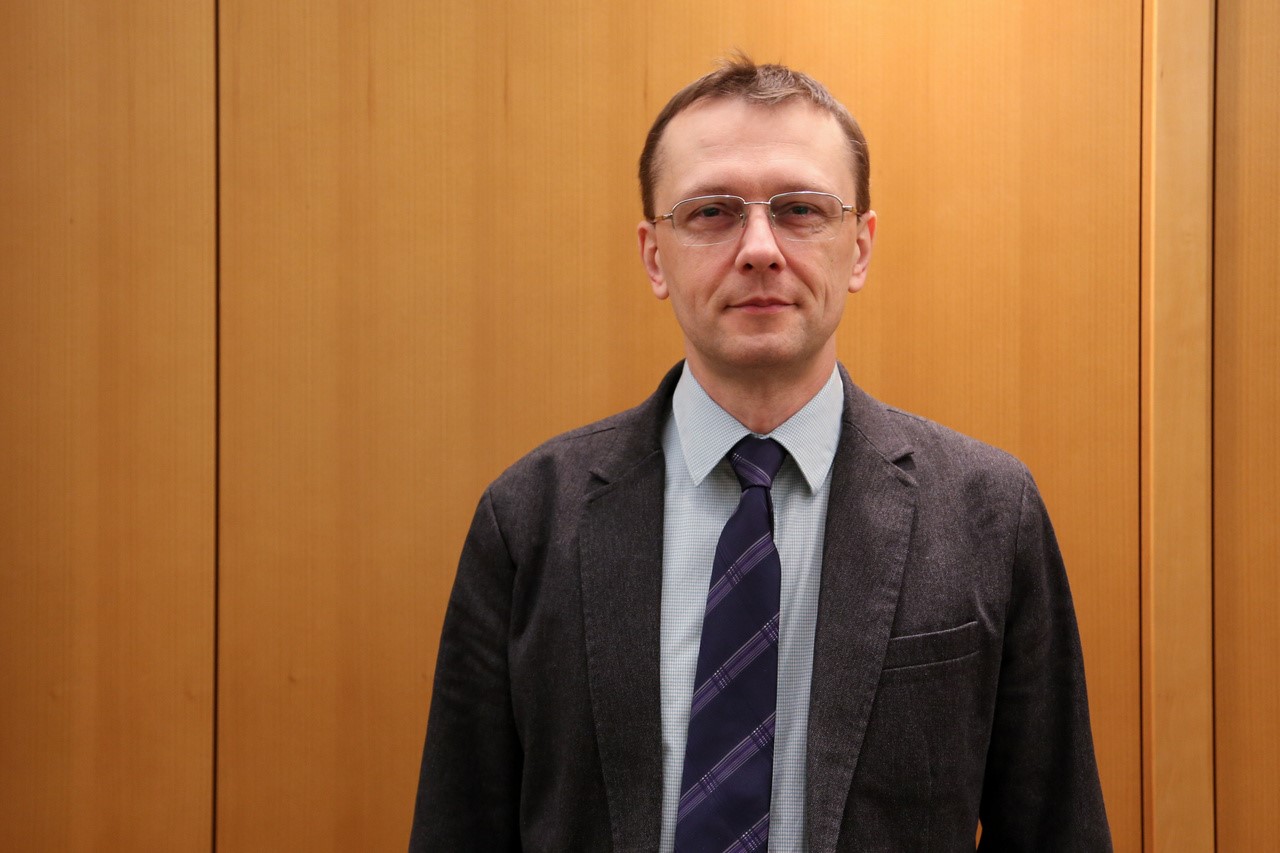 Mr. Kyrylo Loukerenko is a Reagan-Fascell Democracy Fellow and the executive director and co-founder of Hromadske Radio (“Public Radio”), a leading nonprofit news broadcasting service that provides timely and balanced news on current affairs in Ukraine. From 2012 to 2013, he worked at TVi, a TV channel that represented one of the few voices of responsible journalism at the time. He served as editor of a weekly TV magazine and co-presenter of the daily show “Znak Oklyku” (“Exclamation Mark”), covering Ukraine’s widely criticized 2012 parliamentary elections and other topics. In the early 2000s, he worked as a producer and special correspondent for the BBC’s Ukrainian Service in London and Kyiv.

Shortly after the 2013 Euromaidan revolution, the Russian Federation invaded Ukraine in the opening moves of a conflict which led to the occupation of significant parts of Ukrainian territory by Russian-supported forces. This conflict popularized the term “hybrid war,” a form of conflict in which propaganda and disinformation are used to create the political preconditions for military action on the ground and to thicken the fog of war during periods of intense fighting and unrest. Consequently, the resilience of Ukraine’s media environment has emerged as a focal point for civil society and international donors.

Dean Jackson spoke with Loukerenko, a Reagan Fascell Democracy Fellow and Ukrainian radio journalist, about media reform in Ukraine and the role of community and public service media in fostering a healthy media ecosystem that is less susceptible to disinformation. (This interview has been condensed and edited for clarity. The views and opinions expressed within do not necessarily reflect those of the National Endowment for Democracy.)

Dean Jackson: I’ve heard it said before that Ukraine has “too much media,” meaning that the country’s media market is overcrowded with outlets, many of which serve as political tools for actors at all levels of the political system. Does this ring true to you?

Kyrylo Loukerenko: There are possibly too many players in Ukrainian media at the moment. It’s not exactly a media “market”—it’s a structure which supports [certain] business actors. Some of the media are fully supported by oligarchs with certain political preferences. These oligarchs are not satisfied with the current level of rule of law and are trying to defend their political and economic interests from other groups by buying and funding media which support these interests. They are rich enough to sustain television, radio, and websites for years, even if they are not profitable (as some of them are not).

There are also other players in the media market, such as public service media (i.e. the former state broadcaster), and some nonprofit groups. There is also plenty of internet media, which are very cheap to launch. Some outlets are profitable, some are sustained by wealthy oligarchs, and some survive on grants.

If the Ukrainian media sector were a market in which all the actors acted as rational players, the situation would be less complex and there would be fewer media organizations. Ideally, there would be a commercial segment and a public service segment to the media, which would include nonprofit media.

Ukraine’s national state broadcaster is currently being reformed into a public service broadcaster. Can you describe how a similar process on the local level might promote community or public-service media?

The many Ukrainian state or municipally owned media are transforming into community media, including TV, radio, and print media. This is a very painful process, and not all of the media will survive. For example, in the capital city of Kyiv, the Vechirniy Kyiv (Evening Kyiv)—a daily paper which ran for 91 year—stopped printing and became a website under the same name.

The situation is the same in municipalities across Ukraine. Hopefully, in a few years decentralization and economic growth will increase municipal tax revenue to the point where they can better sustain local community stations. Even despite the fact that Ukraine has not passed a law on community media, the state frequency regulator has already begun distributing frequencies to local community radio stations. These stations also receive money from the municipal government under the condition that they are neutral, hyper-local, reflect community interests, and run no advertising.

What are some examples of the kinds of stories that you hope these community media might run that may not necessarily be found in other media?

Community radio stations report on issues that are underreported in the national or regional media. They tell people what actually happens in their village or town. Nobody knows the setting better. This is their niche.

Local websites or Facebook groups have become one source of competition for community stations. These are based on the initiative of local people and their ability to sustain them. Sometimes these are volunteer run; in other cases, someone pays them for their own purposes. For example, before every election members of Parliament who run for majoritarian constituencies want more media coverage of the playgrounds they’ve built for local children and other such accomplishments.

If community media are supported by the local municipal council, they can be somewhat insulated from this kind of influence. Sometimes local government councils act as one political force, but often there are a few competing political groups within the councils, making it more difficult for any one group to control community media. This can protect community media’s objectivity and impartiality; but in places where there are fewer educated people or where oligarchic influence is strong, things can be very different. But hopefully, these media are run by passionate people and are able to inform their local communities.

Community radio stations report on issues that are underreported in the national or regional media. They tell people what actually happens in their village or town. Nobody knows the setting better. This is their niche.

In very high performing media environments, public media can play an important role as one element of a diverse media space; but getting there takes a lot of political will. Can you describe some of the vested interests that must be overcome for media reform to succeed in Ukraine?

The obstacles to reform at the municipal level are similar to those at the national level. You see some support from politicians, and you see some vested interests arguing against reform. For example, there are members of Parliament affiliated with media which have business disputes with the public broadcaster; they have conflicts of interest and do not support the public broadcaster’s success. There are oligarchs with a very privatized vision for the country who do not believe in the success of any public enterprise.

This is a difficult, painful task, and everybody wants immediate results. The broadcaster is heavily in debt; the workforce had to be cut by more than half. The new broadcaster is unable to sell property to raise funds because the property belongs to the government, which does not want to sell it. Their offices are very old and in need of repair. They are underfinanced, and more financing is a low priority because the country is struggling economically and must maintain a high level of wartime spending. There is also the issue of corruption in Ukraine: some revenue goes missing. Despite this, politicians and civil society expect them to compete with commercial channels in terms of quality and popularity. At the moment they have some popular shows, but their ratings are small compared to commercial media.

You’ve said before that Russia’s occupation of the Crimean peninsula was partially enabled by the weakness of the Ukrainian public media sector. Can you explain how?

I do believe that the weakness of Ukrainian media led to trust in Russian media, and there is still a significant group of Ukrainians who follow the conflict through the eyes of Russian media. Ukraine is a post-authoritarian country with a number of commercial channels which cover politics from often conflicting points of view. The Russian channels, on the other hand, speak with one voice and basically repeat the same messages. Today these channels are less widely available, but at the time of the invasion they were very widely available and were especially popular in the east and in Crimea.

Imagine a viewer or listener in their fifties or sixties who grew up in Soviet times. They are used to getting information from a few homogenous sources, which makes it easier to make decisions. Then suddenly the number of sources of information increased dramatically, so it now takes much more effort to understand what is going on. For instance, some Ukrainian channels tell viewers that certain people are evil, but those are the same people who are trusted and respected on other channels.

The viewer doesn’t understand, so they switch to the Russian channels where there is one clear message and one person who is responsible for everything good—Vladimir Putin—and other countries are portrayed as being in chaos. The consistent propaganda message is that Moscow has always protected people during difficult times such as the Second World War. Presented this way, the situation seems simple, and for some Crimeans it appeared quite logical to join Russia.

A similar conclusion was reached by some people in the Donbas, but in both places they received much less than expected. The war in the Donbas has ruined the region, and instead of an increased Russian pension, people have experienced economic collapse. The Russian media blames Kyiv for the destruction, but this is ultimately not sustainable: people in the conflict zone experience a disconnect between their lived reality and the unified Russian media narrative.

I do believe that the weakness of Ukrainian media led to trust in Russian media, and there is still a significant group of Ukrainians who follow the conflict through the eyes of Russian media.

How can stronger community or public media act as a bulwark against disinformation in the future?

Community and public media can help resist this narrative and encourage reform of the media sector as a whole by winning trust from members of the audience. This is the key task for the national public service broadcaster: if it is run properly and staffed with professional journalists, with time it could remodel the media sector and influence commercial media practices. It could provide a trusted picture of events, as opposed to disinformation coming from other countries. This trust is not only about what journalists say or report: it’s also about media ownership, about the transparency of the management, and about the broadcaster’s ability to operate efficiently.

If it can succeed, the national public broadcaster can set a model for rebuilding the country. It is a common sentiment in Ukraine that the private sector is able to run everything better than the public sector; after the collapse of the Soviet Union, people felt that the public sector cannot sustain itself, that only private initiative is sustainable. This is not true: it should be a combination of the public sector and the market, with a constructive relationship between the two. If this can be achieved, then the Russian narrative—that only authoritarian governments can cope with social problems and rule effectively—will become less attractive.

Trust is not only about what journalists say or report: it’s also about media ownership, about the transparency of the management, and about the broadcaster’s ability to operate efficiently.

FOR MORE FROM NED’s International FORUM ON THIS TOPIC, SEE:

“The Lie is Not the Story: Practicing Journalism in the Disinformation Age,” a Power 3.0 blog post by Dean Jackson.

“The Disinformation Crisis and the Erosion of Truth,” a Power 3.0 blog post by Dean Jackson.

How Russia Props Up Putin in the...

By Christopher Walker and Robert Orttung, as it appeared...

Lessons Learned from the Biens...