UPDATE: As of November 19, 2010, both bloggers Adnan Hajizade and Emin Milli have been freed from jail.

Freedom of speech around the world has come under renewed assault, and in Azerbaijan the government has been particularly aggressive in policing online expression. One NED grantee’s YouTube video satire has resulted in its donkey-costumed star going to jail.

Now, Azerbaijan’s Minister of Communication and Information Technology is calling for more internet regulation to protect the “morals” of young Azerbaijanis, and an Azerbaijani Member of Parliament has suggested a law on information security to guard against foreign intelligence services recruiting Azerbaijani citizens through social networking sites.

“The Government Does Whatever It Wants”
This Royal Netherlands Radio video features Adnan’s father Hikmat Hajizade, of the FAR Center (a NED-supported group), describing his son’s work and current ordeal.

Can’t see the video above? View it here: http://www.rnw.nl/english/video/political-prisoners-azerbaijan-emin-milli-and-adnan-hajizade

But the YouTube video featuring a mock “press conference” with a donkey that landed NED grantee Adnan Hajizade in jail can hardly be considered a moral threat or a foreign recruitment tool. Hajizade stars, swathed in a donkey costume, to mock a government debacle involving wildly overpriced donkeys imported from the EU. In the “press conference,” a “German” donkey describes his luxurious journey and warm welcome to the fabulous country of Azerbaijan. When a “journalist” questions the costs involved, the star proclaims that he is a “top-ranked donkey” and proves it by playing a violin for the amazed onlookers.

The video was only a small part of Adnan Hajizade’s work in promoting democratic values in Azerbaijan. Adnan – who went to high school in the US and studied political science at the University of Virginia, Richmond – was key in establishing the OL! Azerbaijan Youth Movement, which has received NED support since late 2006. OL!, which means “to be” in Azeri, encourages young people to be “more than a number.” Rather than focusing on politics, OL! tries to occupy an apolitical middle-ground, encouraging social engagement rather than partisan affiliation. Its message has resonated with young Azerbaijanis.

Since its founding, OL! has grown from a group of 20 students and recent graduates to approximately 200 representatives across Azerbaijan. At the core of OL!’s activities are five clubs, organized around human rights, international relations, law, economics or leadership development. OL! conducts numerous roundtable discussions and seminars, and utilizes a wide range of media, including YouTube videos and a Facebook group; news and discussions are posted on the OL! website and blog.

OL!’s popularity gave its leadership the confidence to launch the Free Thought University (FTU) with NED support in September 2009. Lectures, seminars and discussion groups focus on Human Rights, Democracy, Global Politics, Economics, Social Studies, Philosophy and Media. The FTU has reached nearly a thousand young people and, in a first for the Caucasus, videos and podcasts are posted on the FTU website, a service that established universities in the region have yet to provide, allowing the FTU to reach an even wider audience.

The Free Thought University has become a bridge between older, Soviet-era democracy activists in Azerbaijan and the younger generation raised on Facebook and YouTube. Hikmit Hajizadeh, Adnan’s father, is a former Vice-Premier of Azerbaijan and former Ambassador of Azerbaijan to Russia, and a leading member of Musavat, an opposition party. He is also co-founder and vice-president of the FAR Centre for Economic and Political Research, a long-time NED grantee, and one of the founders of the democratic movement in Azerbaijan. Hikmit and his generation are now able to pass on their experience and insight, and interact with a new generation of democracy activists and young leaders through the FTU. Difficult-to-obtain texts like Alexis de Toquville’s Democracy in America, which have been translated into Azeri, have become the subjects of intense inter-generational discussions about the meaning of society and democracy, and how these can be promoted and developed.

According to Miriam Lanskoy, a Senior Program Officer at NED, OL! “exceeded [NED] expectations in the number of events, the number of participants, and the reach of their programs.” This is perhaps less of a surprise for one University of Richmond professor, who recalls Adnan as “really eager to learn, really thorough, earnest thinker, unusually mature…I remember thinking, ‘Here is the future Prime Minister of Azerbaijan.’”

But Azerbaijan is not a friendly environment for future Prime Ministers. As Lanskoy observes,

“Adnan…chose to dedicate himself to transforming his society through the youth group he started – it is precisely for this reason that he is being punished now. The punishment is testimony to his success.” 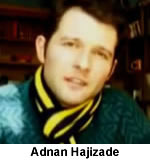 Soon after the donkey satire went online, Adnan and his fellow blogger Emin Milli (who was also involved in producing the video) were assaulted in a crowded café. When the two bloggers reported the incident to the police the same night, they were themselves arrested and charged with hooliganism – a generic charge commonly used in the former Soviet Union to hold political prisoners. A few weeks later, the court held a closed session (banning even journalists and diplomats) and found Hajizada and Milli guilty. Adnan received a sentence of 24 months, while Emin received 30 months.

The verdict was condemned around the world. Amnesty International designated Adnan and Emil as prisoners of conscience, and the US State Department decried the court’s decision as “a step backwards for Azerbaijan’s progress toward democratic reform.” Adnan’s father and OL! launched a campaign for the bloggers’ release with the slogan, “One World, One Dream, Free Donkey,” which received international attention. However, the appeals process has been exhausted.

So Adnan is in a Baku prison, and Emin in Prison Colony Number 5, about 80 miles south of Baku. Visitors report that both are perpetually short on reading material. Friends have set up a Facebook group to accept book donations for both bloggers. OL!, the FTU and the youth movement in Azerbaijan carry on despite the chilling environment. Paradoxically, as the government continues its repressive tactics, more Azerbaijanis seem to be going online. Facebook reports that the number of users in Azerbaijan grew by more than half in the first six months of 2010, from just over 100,000 people in January to almost 166,000 people by June 2010. The government has noticed – and is not letting up its pursuit of Repression 2.0.