Liberia is moving beyond war atrocities, blood diamonds and drug trafficking as NED grantee Rescue Alternatives Liberia (RAL) helps shift the national focus towards a more democratic future. After lengthy preparation and national consultation, RAL has partnered with Liberian legislators to submit an anti-torture bill to the 52nd National Legislature for enactment into law.

The bill, “An Act to Prohibit and Prevent Torture and Ill-treatment in Liberia,” is the product of over three years of drafting, a process that included a country-wide discussion of the definition of “torture.” Its introduction follows rapidly on the heels of Liberia’s first-in-Africa ratification of the Optional Protocol to the UN Convention Against Torture. Encouraged by this positive development in the political environment, RAL is now focused on further educating the public about the Act and building support in Parliament. 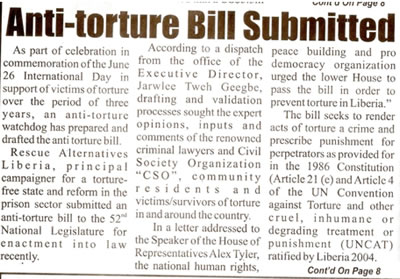 RAL, headed by its executive director Jarwlee Tweh Geegbe, has worked with the National Endowment for Democracy since 2004, when it was originally called the Prisoners Assistance Program. Rescue Alternatives Liberia focuses on prison reform, and works to improve conditions in Liberia’s prisons – including the two largest, the Monrovia prison and the Kakata prison – by increasing public understanding of prisoner’s basic human rights.

RAL places posters around prisons that list prisoner rights, holds workshops for corrections and other law enforcement officers on basic human rights and reconciliation, provides legal assistance to pre-trial detainees, and provides assistance to those who are jailed wrongfully, or are unaware of the crimes they are accused of having committed. RAL also works with those who have suffered torture and trauma while in detention.

RAL increases its effectiveness by partnering with the United Nations and other smaller organizations such as the Justice and Peace Commission and the Association of Female Lawyers. Together, they take on the challenges posed by crowded prison conditions, corrupt judges, and the extremely large number (almost half) of detainees who have not yet had trials. Some prisoners are brought in on questionably minor offenses and the time they subsequently spend in prison is longer than what an appropriate sentence would dictate.

But while RAL is effective in focusing the spotlight of national attention on Liberia’s challenges, the organization faces difficulties of its own. When corruption cripples the government’s ability to rule effectively, international NGOs and civil society organizations (CSOs) direct their funds to groups within the country. But in times of governmental transition, as Liberia has been experiencing, this money flows back to the government to help it provide effective governance. Unfortunately, this leaves many local NGOs and CSOs dry and without resources. It is a difficult, though perhaps inevitable, part of the democratization process. But by working with organizations like NED, RAL has been able to continue its efforts addressing the political and judicial corruption that exists within the prisons.

“met Senator John McCain, himself a victim of torture, at a NED event several years ago when he was in the US getting help for a young Liberian torture victim. His organization has persevered and grown in effectiveness ever since.” 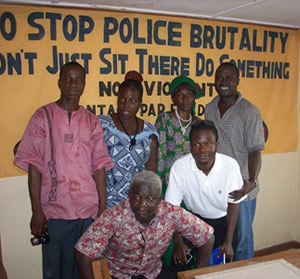 For now, RAL’s small staff has finished celebrating the introduction of its ground-breaking anti-torture bill, and is focused on getting it passed into law. As Jarwlee has said, “let us be quick to acknowledge that this would be a long road, and we are therefore resolved to go as long as it [must] take.”

At the end of that road, the bill would classify torture as a crime and bring national law into line with the UN Convention against Torture. As RAL and Jarwlee Tweh Geegbe told The News, one of Liberia’s leading papers,

“to render torture a crime in Liberia is to accelerate the democratization process of our country by creating conditions necessary to achieve a society where human rights are respected and the values of human society will be accentuated and the respect for [the] dignity of the human person is upheld uncompromisingly.”