“The Arab Revolutions: Democracy and Historical Consciousness” was the topic addressed by Dr. Abdou Filali-Ansary, professor at the Institute for the Study of Muslim Civilisations of the Aga Khan University in London, at the eighth annual Seymour Martin Lipset Lecture on Democracy in the World on October 26.

In the course of his lecture, Dr. Filali-Ansary refers to two prominent essays written by Seymour Martin Lipset: “Some Social Requisites of Democracy: Economic Development and Political Legitimacy” (American Political Science Review, March 1959) and  “The Social Requisites of Democracy Revisited” (American Sociological Review, February 1994) . To read these texts, which were kindly made available with permission of the publishers, please download the PDFs above.

Hosted by the Embassy of Canada in Washington, D.C., the Lipset Lecture was a joint effort of the National Endowment for Democracy and the Munk School of Global Affairs at the University of Toronto, where Dr. Filali-Ansary also spoke on October 24. The Washington lecture was made possible by generous support from the American Federation of Teachers, the Albert Shanker Institute, and the Canadian Embassy. Video of the lecture is available here.

“Not just because our friend Abdou Filali-Ansary will address the Arab revolutions, which have now brought about the fall of dictators in Tunisia, Egypt and Libya, with the very strong possibility that other tyrants will fall in Yemen, Syria and other countries, but also because it follows by just three days the first democratic election of the Arab Spring, which took place in Tunisia on Sunday.”

NED Vice President for Research & Studies Marc Plattner reiterated the importance of this year’s events in the Middle East and North Africa.

“For all those who care about the fate of democracy in the world, 2011 will always be remembered as the year of the Arab revolutions,” Plattner said in his remarks introducing Filali-Ansary.

“It is true that we cannot yet know what their ultimate outcome will be, even in those countries where they already have succeeded in ousting dictators. But at a minimum they have demonstrated that the Arab countries can no longer be regarded as the only part of the world impervious to the appeal of democracy.”

Filali-Ansary emphatically agreed, contending that “democracy has become a universal norm,” and that in Arab societies today “the only political legitimacy that is acceptable is the democratic one.” He argued that this was true even for the “mainstream Islamists.” Much of his talk and the question-and-answer session that followed focused on how the desire of many Muslims to live in a society based on Islamic law (sharia) can be reconciled with their desire to live under democracy. A revised version Filali-Ansary’s lecture will be published in the April 2012 issue of the Journal of Democracy.

The Lipset Lecture is named for one of the great democratic scholars and public intellectuals of the twentieth century. Seymour Martin Lipset’s scholarship on such themes as the conditions for democracy, political parties, voting behavior, extremist movements, ideologies, and public opinion constitutes one of the most prolific, insightful, and widely-read bodies of work on democracy ever produced by a single author. 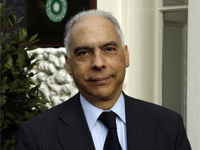 Abdou Filali-Ansary is currently a professor at the Institute for the Study of Muslim Civilisations of the Aga Khan University (London), an institution which he served as Founding Director from 2002 to 2009. Previously he had been Founding Director of the King Abdul-Aziz Foundation for Islamic Studies and Human Sciences in Casablanca, Morocco, (1984–2001) and secretary-general of Mohammed V University in Rabat (1980–1984), where he also taught modern philosophy.

Dr. Filali-Ansary has written widely on Islam, modernity, democratization, and civil society in the Muslim world, especially on intellectual trends in contemporary Muslim contexts. His books include Is Islam Hostile to Secularism?; Reforming Islam: An Introduction to Contemporary Debates; and a translation from the original Arabic into French of Ali Abdel-Raziq’s landmark book Islam and the Foundations of Political Power. In 1993 he co-founded the bilingual Arabic- French journal Prologues: revue maghrébine du livre and served as its editor until 2005. He is a longtime member of the Editorial Board of the Journal of Democracy and a frequent contributor to its pages.