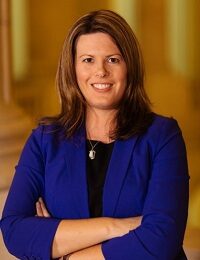 Christina Mahoney is Deputy Chief of Staff/Legislative Director for Congressman Emanuel Cleaver, II from Missouri’s Fifth Congressional District. In this role she advises the Congressman on foreign policy for his position on the Helsinki Commission, the House Homeland Security Committee, as well as his position as Co-Chair of the Congressional Serbian Caucus. Christina has over fifteen years of congressional experience and has worked on agriculture and trade, energy, and transportation and infrastructure issues. As a Legislative Assistant, she staffed the Congressman for his role on the Select Committee on Global Warming and Energy Independence. Christina participated in several foreign policy and cybersecurity congressional fellowships, and has been selected for staff delegations to Asia, the Middle East, and the Balkans. Christina began her career on Capitol Hill in the office of Senator Bill Nelson (D-FL). She is a member of the Women’s Congressional Staff Association and board member of the Women’s Congressional Golf Association. Christina earned her bachelor’s degree in political science with a concentration in environmental studies from Grinnell College in Iowa.