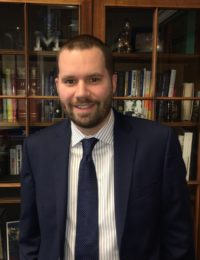 John is Senior Professional Staff, Foreign Affairs Committee, House of Representatives. Previously, he worked as a senior advisor for the House Committee on Homeland Security. In this role he worked closely with the Committee press team and Subcommittee staff to formulate and communicate Chairman Michael McCaul’s positions on terrorism, border and cybersecurity, U.S. foreign policy, and other national security issues. He also previously served as Communications Director for Congressmen David McKinley and Marlin Stutzman and as Speechwriter for Senator Rob Portman and Majority Leader Eric Cantor. Before working on Capitol Hill, John worked in the Asia Division at the International Republican Institute and on several political campaigns at the local, state, and national level. He has a Bachelor’s and Master’s degree in Political Science from American University in Washington, DC, and a strong passion for democracy promotion and human rights.