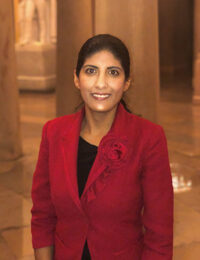 Paloma González is a career Foreign Service Officer for the U.S. Department of State. She has worked over 10 years in Western Hemisphere Affairs advancing U.S. foreign policy objectives in Colombia, Brazil, Haiti, and Mexico.  She is currently in training for her new assignment as Deputy Political Counselor in Bucharest, Romania.  Paloma’s previous assignment was as Colombia Counternarcotics Policy Lead for the Bureau of International Narcotics and Law Enforcement Affairs overseeing a $250 million budget.  Previously she served as the Haiti Program Officer managing a $76 million budget.  She has also served as the Political and Economic Chief for the U.S. Consulate General in Recife, Brazil; Staff Assistant for the Bureau of Western Hemisphere Affairs; American Citizen Services Officer in Tijuana, Mexico; and Political Officer in Bogota, Colombia. From 2017- 2018, Paloma was a foreign policy advisor for the Senate Foreign Relations Committee as part of the Department’s Pearson Fellowship.  Paloma was recognized by New America as a Latino National Security & Foreign Policy Next Generation Leader and listed on the Huffington Post’s 40 under 40 Latinos in Foreign Policy.  She has a B.A. in International Affairs from Lewis & Clark College and M.S. in Foreign Service from Georgetown University.  She is a Rangel and an International Career Advancement Program (ICAP) Fellow.  Paloma is a proud first-generation Mexican American; fluent in Spanish, French, and Portuguese.