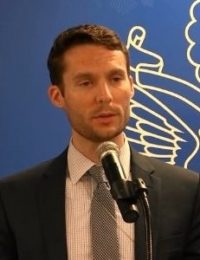 Patrick Quirk is a Senior Policy Advisor in the Bureau of Conflict and Stabilization Operations (CSO) at the U.S. Department of State. In this capacity, he leads CSO analysis, research, and planning efforts focused on political transitions, stabilization, and governance. He regularly advises senior U.S. officials on how to mitigate instability risks in countries that are strategically important to the United States.  Concurrent to serving in CSO, he is an Adjunct Professor at Georgetown University, teaching courses on stabilization and political violence. Before joining State, Dr. Quirk was a Research Fellow at the German Marshall Fund of the United States, where he drafted recommendations for the State/USAID 2014-2018 Quadrennial Diplomacy and Development Review (QDDR) and examined the role that rising powers play as foreign aid providers. Prior to joining GMF, he was a senior manager at Creative Associates International, where he led risk assessments for the U.S. government, managed democracy assistance and conflict prevention programs in East Africa and the Middle East, and was responsible for business development.

Dr. Quirk’s analysis has appeared in Foreign Policy and the Baltimore Sun, among other publications. His book, Great Powers, Weak States, and Insurgency: Explaining Internal Threat Alliances, was published in early 2017. He co-authored USAID’s Best Practices in Electoral Security, a Guide for Democracy, Human Rights and Governance Programming and is the lead author of CSO’s Electoral Violence Assessment Framework assessment methodology. He holds a Ph.D. in Political Science from Johns Hopkins University and a B.A. in History/Political Science from Bates College.