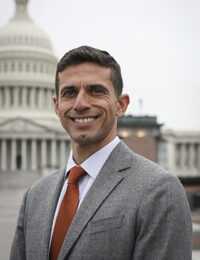 Philippe Nassif is the Advocacy Director for the Middle East and North Africa at Amnesty International USA where he works with U.S. government representatives in Congress and the executive branch to ensure that human rights are prioritized and protected across the region. Philippe has testified before Congress and his commentary and analysis have been published in outlets including the New York Times, Washington Post, Wall Street Journal and Los Angeles Times. Philippe was named one of The Hill’s top Lobbyists in 2019 due to his work on the conflict in Yemen and arms sales to Saudi Arabia and the UAE. In 2020, Philippe was named a Next Generation Latino Foreign Policy and National Security Leader by the New America Foundation. Before coming to Amnesty, Philippe served as Executive Director of In Defense of Christians in the Middle East, worked at CARE USA, The Obama Presidential Campaign, The White House on President Barack Obama’s advance team, and for the Mayor of Houston, Texas. Philippe grew up in New Orleans and Houston, speaks Arabic and Spanish and has Lebanese/Mexican heritage. Philippe received his M.A. in International Conflict Resolution from St. Mary’s University in San Antonio, TX and his B.A in International Relations from the University of St Thomas in Houston, TX.