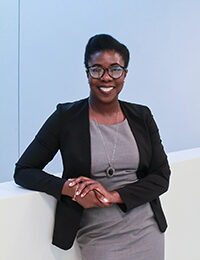 Rachel Okunubi is a U.S. diplomat currently serving as the National Security Council Director for the Caribbean where she guides interagency foreign policy strategy and coordination.  Prior to her time at the White House, Rachel served as advisor for Western Hemisphere policy to the Under Secretary of State for Political Affairs.  As a career member of the U.S. Foreign Service, Rachel has worked on crisis response in the State Department Operations Center as well as political, multilateral, and security issues in the Office of Haitian Affairs.  Rachel has worked on large U.S. public engagement projects in Morocco and Nigeria, where she co-founded the Carrington Youth Fellowship Initiative.  While based in Senegal, Rachel worked on the intersection between public space management and innovation diplomacy while covering 10 diplomatic missions and leading public diplomacy trainings in Africa and Europe.  Rachel has conducted fieldwork and written on culture, religious movements, and foreign policy and remains active in workforce development efforts.  A native of Washington, DC, Rachel holds degrees and certificates from Princeton University, the Fletcher School of Law and Diplomacy at Tufts University, and Cornell University.