The National Endowment for Democracy honored Floribert Chebeya with its Democracy Service Medal in a ceremony Tuesday at the United States Holocaust Memorial Museum. The medal presentation was an emotional end to a half-day conference, “Voices from the Congo: the Road Ahead,” co-organized by NED, the United States Holocaust Memorial Museum and the Eastern Congo Initiative.

Chebeya, a longtime grantee of NED and a pillar of Congo’s civil society, was awarded the medal posthumously for his work as founder and president of Voix des Sans Voix (Voice of the Voiceless), a leading Congolese human rights organization that works to defend  and empower citizens in the Democratic Republic of the Congo.

“To countless people in the D.R.C., as well as in other African countries, Floribert was a savior,” NED President Carl Gershman said at the ceremony. “From his unmarked and humble office, he fought for Congolese citizens whose rights the country’s leaders had ignored and trampled upon.”

“To countless people in the D.R.C., as well as in other African countries, Floribert was a savior”

Gershman lauded Chebeya’s commitment to the powerless, and his continued passion for helping others.

“Whether it was a laborer who was taken from his family for questioning about his political activities and never seen again, or a young man who had been shot by police while participating in a largely peaceful demonstration, Floribert’s voice was heard,” he said. “No human rights violation perpetrated by the state was too insignificant to merit his organization’s attention. He denounced three generations of authoritarian rulers and, in so doing, rescued obscure cases from oblivion and reminded those in power that the rights of all its citizens matter.”

Chebeya was killed in June 2010 after criticizing the inspector general of the police for a violent suppression of a political and religious movement in Kinshasa, D.R.C. His body was found in a car after being called to the police station. The body of his colleague and driver Fidele Bazana has never been recovered. Many governments, including those of the United States and the European Union along with the heads of international organizations and United Nations Secretary-General Ban Ki Moon condemned the killing and called for an independent investigation of his death. A military tribunal in June 2011 sentenced to death four of eight defendants in the case, though the police commissioner John Numbi — considered to be the prime suspect — was never charged. 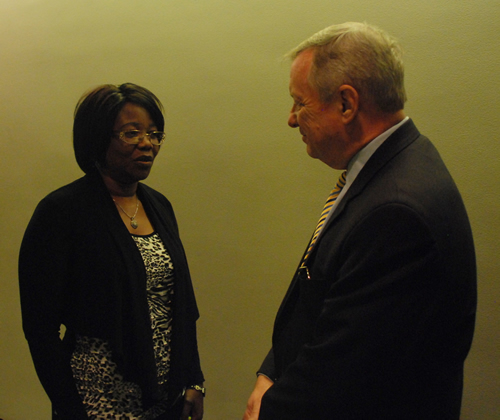 “I don’t have the words to express what I am feeling right now, a great sense of loss of a dear one but also a great void that is filled by the remarkable solidarity that you have brought to us to this day,” she said following an emotional standing ovation in honor of her husband.

“Ladies and gentlemen, the voice of the voiceless is no longer with us.  I hope that you who are present will not forget to be the voices who will grow louder to defend this cause.”

Chebeya Mangbenga called on the international community to continue to put pressure on the D.R.C. for its human rights violations and thanked those who supported her husband’s efforts. “Those who’ve decided to govern the Congo in terror — [with] massive human rights violations, impunity and corruption — obeyed no law or morality and conceived and realized their plan of execution on that person who carried and defended the voice and rights of the weak and vulnerable,” she said. “Ladies and gentlemen, the voice of the voiceless is no longer with us.  I hope that you who are present will not forget to be the voices who will grow louder to defend this cause.”

Floribert Chebeya is the 28th recipient of the medal. Past awardees include Lech Walesa, Vaclav Havel, Congressman Tom Lantos and the Dalai Lama.