The staff and Board of Directors of the National Endowment for Democracy (NED) were deeply saddened to learn that long-time Board Member and dear friend of NED Jean Bethke Elshtain died on Sunday, August 11, 2013.

“Jean Elshtain was America’s preeminent public intellectual,” said NED President Carl Gershman. “She was a great believer in democracy and the values of liberty and individual responsibility that under-pin it. She was a beloved member of the NED Board of Directors and a most worthy recipient of NED’s Democracy Service Medal. She will be sorely missed, but remembering her will continue to inspire our work.” 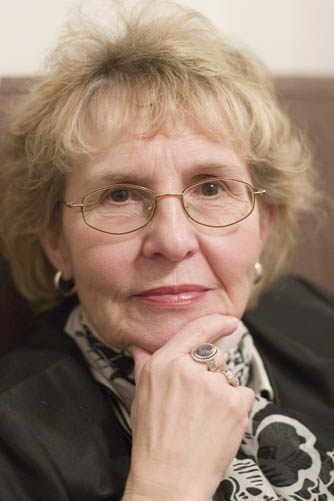 Elshtain, who was the Laura Spelman Rockefeller Professor of Social and Political Ethics at the University of Chicago Divinity School, served on the Endowment’s Board from 2003-2011 and was the Board specialist for NED’s South Asia and global programs. When he presented the Democracy Service Medal to Elshtain in 2011, Gershman remembered that,

“…her favorite project was the quaintly named Pakistan Fisherfolk Forum, a Karachi-based grassroots social movement with 60,000 (dues paying) members that works to protect the rights of Pakistan’s large inland and coastal fisherfolk community from abuse by government, landowners, and other powerful interests. It had all the qualities that Jean likes: real people, tied to their local communities, working together to solve real problems, such as getting the Pakistani authorities to release jailed Indian fisherfolk, or to get a paramilitary border force to vacate fishing grounds it had illegally occupied.”

Elshtain was also an important contributor to the intellectual life of NED, and in 2008 was selected to deliver the annual Seymour Martin Lipset Lecture on Democracy in the World. Her topic, Democracy and Religion: Allies or Antagonists, explored a frequent intersection of her scholarship and life’s work, the role of religion in public life. An article based on the lecture was published by NED’s Journal of Democracy in April 2009.

Elshtain believed deeply in the mission of the National Endowment for Democracy, and in the broader struggle of all who risk so much to advance basic rights and freedoms. She spoke eloquently at a memorial for Czech dissident and President Vaclav Havel organized by NED in January 2012, reminding those present of his call to live in truth; to live “as if” there was freedom; to imagine the alternatives to life in a totalitarian system and to act on that imagination, fully aware of the price that might be paid as a result.