The Devil in History: Communism, Fascism and Some Lessons of the Twentieth Century from National Endowment for Democracy on Vimeo. 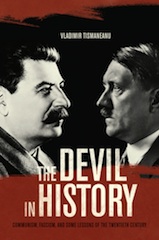 The Devil in History is a provocative analysis of the relationship between communism and fascism. Reflecting the author’s personal experiences of living under communist totalitarianism, the book is about political passions, radicalism, utopian ideals, and their catastrophic consequences in the twentieth century’s experiments in social engineering.

Vladimir Tismaneanu compares communism and fascism as competing and occasionally strikingly similar systems of political totalitarianism. In his presentation, he examined:

Vladimir Tismaneanu is professor of comparative politics and director of the Center for the Study of Post-Communist Societies at the University of Maryland. His research areas include communist political systems, comparative politics, political sociology, and political theory, as well as the contemporary politics of Central and Eastern Europe. His previous books include Fantasies of Salvation: Democracy, Nationalism and Myth in Post-Communist Europe (Princeton University Press, 1998) and Reinventing Politics: Eastern Europe from Stalin to Havel (Free Press, 1994). Mr. Tismaneau is also a member of the editorial board of the Journal of Democracy and the research council of the International Forum for Democratic Studies.

Michael Allen is special assistant to the vice president of government relations and public affairs at the National Endowment for Democracy.