In the two month’s after Laura Pollán’s death, the Cuban people showed a renewed determination to defend their rights. Just as she and the other Damas de Blanco would end their weekly marches from the church of Santa Rita by chanting “Libertad,” so did throughout the island Cubans are gathering in protest and chanting “Libertad” when they were attacked and detained. By affirming in this way their dignity and their hope, they are carrying forward Laura Pollán’s vision of a new Cuba, a Cuba whole and free.

Difficult struggles lie ahead, but the period of darkness is drawing to a close, and the light that is shining in the distance glows with the memory of Laura Pollán. She was a simple woman – a mother, a housewife, a teacher, someone who loved literature. Until her husband Héctor Maseda Guitiérrez was arrested along with 74 others in the Black Spring of 2003, she was not political. But from the moment he was taken away, she had a mission – to free her husband – and to do so, she rallied other women whose loved ones had disappeared to form the Damas de Blanco. Weekly they marched, dressed in white and carrying gladioli, the garments symbolizing the purity of their motives and the flowers their integrity and moral strength. And when they chanted “Libertad,” they did so not just for their husbands and fathers and sons and brothers, but for Cuba itself.

The regime reacted to their peaceful marches with violence and venom. The women were insulted, called traitors and mercenaries, and attacked by shock mobs. But they persisted, and as they did, their reputation and moral authority grew in Cuba and throughout the world.

Then, on September 24, when the women were being shoved and beaten by one of these mobs, Laura was personally attacked by an agent of the State Security. She fell into critical condition just eight days later and died on October 14, a martyr in the cause of freedom. 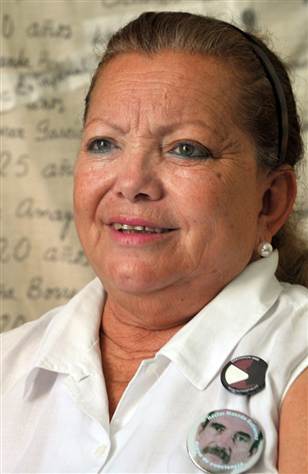 While people throughout Cuba mourned the death of Laura Pollán, the government responded with “infinite ideological rancor,” in the words of Yoani Sanchez. “Laura is gone,” she continued, “and now all the acts of hatred against her resonate even more grotesquely. Laura is gone and we are left with a country slowly waking up from a very old totalitarianism that doesn’t even know how to say ‘I’m sorry.’”

Yes, Laura is gone, but her memory lives on the hearts of Cubans. Her example of dedication to justice inspires others to fight on. The purity of her motives, the strength of her character, the depth of her integrity, and the force of her fearlessness will light the way forward. Her legacy will help Cubans build a new morality after more than half a century of political bondage, poisonous hatred, and dehumanizing lies. For all she did in her life that ended too soon, and for giving her last full measure of devotion to the cause of “Libertad,” the National Endowment for Democracy was honored to present posthumously to Laura Pollán its Democracy Service Medal.

Pablo Diaz Espí
A graduate of the German Academy for Film and Television, Pablo Diaz Espí left Cuba for Berlin in 1991. Mr. Diaz Espí has worked as a writer and a journalist, and has published a wide array of articles and reports in media outlets throughout Europe, including his recent article, “Who Killed Laura Pollán?” During the past decade, Mr. Diaz Espí has launched and developed several initiatives that incorporate that use of new technologies into strategies to defend human rights in Cuba. In 2009, Mr. Diaz Espí founded the online media platform Diario de Cuba (www.diariodecuba.com), which has quickly become a reference point for analysis of political, social and cultural developments in Cuba and in the Cuban Diaspora.

Janisset Rivero
A Cuban-American human rights activist, Janisset Rivero currently serves as the National Adjunct Secretary of the Cuban Democratic Directorate, a nongovernmental organization that works to promote full respect of universal human rights in Cuba. In this capacity, Ms. Rivero has testified before the Inter-American Commission of Human Rights of the Organization of American States and the United Nations Human Rights Council. Similarly, she hosts the radio program Barrio Adentro (In the Neighborhood), broadcasted to Cuba via Radio República. Ms. Rivero holds a B.A. in Communications and Public Affairs from the Instituto Universitario de Nuevas Profesiones in Venezuela, and an M.A. in Hispanic literature from Florida International University, in Miami, Florida. She has published numerous poems, essays, and articles in newspapers and magazines in Venezuela, Puerto Rico, and the United States.

Yesenia Alvarez Temoche
Yesenia Alvarez Temoche is the founder and president of the Political Institute for Freedom (IPL) in Peru, an organization that is part of the Latin American Liberal Network and the International Federation of Liberal Youth. At IPL, Ms. Alvarez has directed programs to train youth in Peru on issues of democracy, development and the rule of law. In her work as an activist, Ms. Alvarez has led initiatives to promote human rights and democracy in Cuba and to raise awareness in Latin America about the current situation in the country. Ms. Alvarez co-directed the documentary “Cuba and the Elephants,” which offers a realistic view of Cuba that goes beyond the attractions seen by tourists visiting the island. In 1999, Ms. Alvarez was named a fellow at the Frederich Naumann Foundation in Gummersbach, Germany, and has participated in seminars on political parties and NGOs, public policy development, and Liberalism.

Barbara E. Joe
A native of Boston and an alumna of the University of California, Berkeley, Barbara E. Joe works as a freelance writer, translator, and Spanish interpreter. She has been a member of Amnesty International (AI) since 1981, serving in various leadership positions, including for 14 years as volunteer country specialist for Cuba and the Dominican Republic and for the last eight years as volunteer coordinator for the Caribbean for AI-USA. She has visited Cuba seven times, most recently in 1997, when she was expelled and told not to return. From 2000-20003, she served as a health volunteer with the Peace Corps in Honduras and wrote, Triumph & Hope: Golden Years in the Peace Corps in Honduras, declared “Best Peace Corps Memoir of 2009” by Peace Corps Writers. Prior to joining the Peace Corps, she worked for 16 years at the American Occupational Therapy Association in Bethesda.