The Role of Economics in Democratic Transitions: The Case of Tunisia from National Endowment for Democracy on Vimeo.

Part of the Role of Economics in Democratic Transitions Lecture Series

What are the elements that shape the outcome of a country’s transition from authoritarianism to democracy? All too often policy analysts focus on the political process, while neglecting the vital role of economic reform in determining democratic success or failure. Tunisia, the birthplace of the Arab Spring, has made significant strides towards developing democratic consensus; however, two years later, the country’s continued struggle with economic stagnation, high unemployment and lack of entrepreneurial opportunities poses serious challenges to its transition.

Drawing upon his experience in business and civil society in Tunisia, Dr. Mondher Ben Ayed discussed why tackling these economic questions is essential for Tunisia’s future stability and success.

The Tunisia case study is the second lecture in a joint series on “The Role of Economics in Democratic Transitions” organized by the Legatum Institute, the National Endowment for Democracy’s International Forum for Democratic Studies, Foreign Policy, and World Affairs that explores the link between economic reform and political transitions. 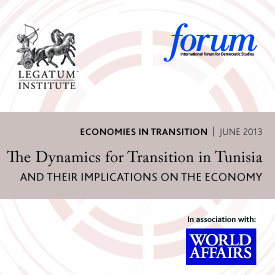 Dr. Mondher Ben Ayed is president and chief operating officer of TMI, a Tunis based technology firm that has worked with Oracle, Sun Microsystems, and Acer to provide services around value-added solutions to telecommunications operators, banks, financial institutions, and government entities. He also has been active in various civil society positions since the mid-1990s, serving as president of the Tunisian-American Chamber of Commerce from 2007 to 2009 and as the private-sector coordinator on behalf of the Tunisian Business Association for the World Summit on the Information Society in 2005. He served from 2011 to 2012 as an advisor to the Prime Minister of Tunisia on economic issues and international relations.

Larry Diamond is co-founder and co-editor of the Journal of Democracy and co-chair of the International Forum for Democratic Studies’ Research Council at the National Endowment for Democracy. He is also director of Stanford University’s Center on Democracy, Development, and the Rule of Law.