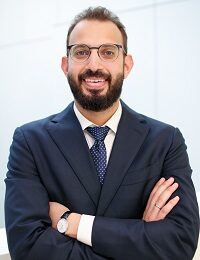 Ali El Yassir serves as a Program Officer in the Near East Affairs team at the State Department’s Bureau of Democracy, Human Rights, and Labor (DRL). In this role, he oversees and coordinates a multi-million dollar portfolio of democracy and human rights programming in the Middle East region. Previously, at Partners Global and ARK Group, he managed the delivery of  governance, stabilization assistance, and countering violent extremism (CVE) programming in fragile and conflict-affected countries in the region, including Yemen, Syria, Lebanon, and Iraq. Before transitioning into development programming, he worked at several think tanks, including the United States Institute of Peace, the Middle East Institute, and Carnegie’s Middle East Center, where he researched political and security issues in the Middle East region. He also previously worked at Globesight, a Dubai-based strategic advisory firm, where his work supported nonprofit clients in navigating complex political and social challenges in the Middle East. Ali holds an M.A. in International Affairs from the Fletcher School of Law and Diplomacy at Tufts University and a B.A. in Political Science from the American University of Beirut. He grew up between Lebanon and the United Arab Emirates and worked and traveled across the Middle East; he is a native Arabic speaker.