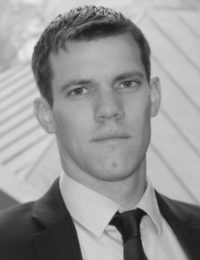 Andrew Eilts is currently serves as Policy Director for a network of business leaders and philanthropists who are actively engaged in policy advocacy. In this capacity, he provides advice and guidance on the federal and state legislative progress while working with think tanks, advocacy organizations, and grassroots groups across the country.

Previously, Andrew worked at US Policy Metrics, an economic consulting firm that analyzes legislation and regulations across a range of public policy, business strategy, and foreign policy areas. Andrew also spent four years at General Electric in global policy and government relations, covering issues in all of GE’s then-businesses including aviation, finance, energy, infrastructure, and transportation. After working for GE in both Washington and London, Andrew served with the Romney for President policy team in Boston, working on both economic and foreign policy issues during the 2012 presidential campaign.

Andrew graduated from the George Washington University with a bachelor’s degree in international affairs and concentrations in International Economics and Conflict and Security. He also earned a Master of Science in International Political Economy from the London School of Economics.