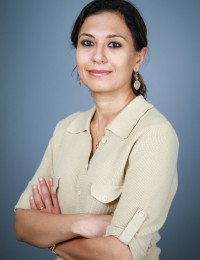 Azadeh Pourzand is a project director at International Research and Exchanges Board (IREX), focusing on civil society strengthening, governance and media programs. Azadeh has 5 years of experience working in the fields of international development and foreign affairs analysis. In recent years, she has worked and/or studied in the Middle East, South Asia, and Latin America. She occasionally writes about the geopolitics of the Middle East and the role of the established and emerging powers in the region. In March 2013, while in India, Azadeh co-authored a paper called “Protests and Possibilities: West Asia and India” published by Gateway House: Indian Council on Global Relations. Azadeh is also the Executive Director of the Siamak Pourzand Foundation, a small nonprofit organization that promotes freedom of expression in the context of contemporary arts and culture in Iran. She has a Master of Public Policy (MPP) from Harvard Kennedy School of Government, and a Master of Business Administration (MBA) focused on entrepreneurship from Nyenrode Universiteit in the Netherlands. Azadeh holds a Bachelor of Liberal Arts, cum laude, with a major in Comparative Literature from Oberlin College.