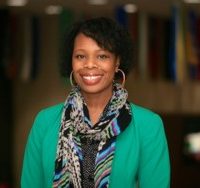 Bunmi Akinnusotu is currently Deputy Director of the Rangel Fellowship at Howard University. She is also the creator and producer of What in the World?, a radio program and podcast that makes US foreign policy understandable and amplifies experts from underrepresented backgrounds. Bunmi attributes her passion for foreign policy and public diplomacy to being a first-generation American who heard her Nigerian relatives debate world politics and observed the benefits of a functioning democracy through the lives of her family members. She earned a Master’s degree from Columbia’s School of International and Public Affairs, worked in East Timor on democracy-building programs and taught English in the Dominican Republic. In 2014, she became a political appointee in the Obama administration and worked at the Environmental Protection Agency, advancing initiatives for global resource conservation policy, civil rights and tribal partnerships. Bunmi’s extensive career in the non-profit sector started humbly as an AmeriCorps volunteer working to end domestic violence. She also was a fundraiser for the YWCA Metropolitan Chicago and United Way Metropolitan Chicago. She has an additional Masters from Illinois State University and a Bachelor’s degree in Business Administration from Bryant University. She is a recovering collegiate volleyball player, the ultimate Nina Simone fan and loves podcasting. Her goal is to become America’s first Nigerian-American Ambassador.