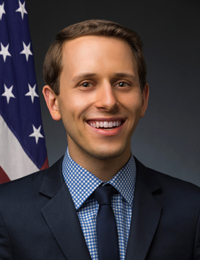 David works at the U.S. House of Representatives, serving as Legislative Director/General Counsel to the Energy & Commerce Committee’s Vice Chair and Homeland Security Committee’s Cybersecurity Subcommittee Emeritus Chair. David previously was Chief Counsel/Professional Staff Member for the Foreign Affairs Committee’s Subcommittee on Asia, the Pacific, and Nonproliferation, where he led legislative efforts regarding China, India, ASEAN, Korea, Iran, and elsewhere. He also served as Counsel to its Chairman, including on international matters before the Financial Services Committee. Previously, he was an attorney at a global law firm in Hong Kong, where he was recognized as one of the Indo-Pacific’s next generation of leading lawyers and represented a wide variety of multinational and start-up clients. He also practiced law on the Senate Judiciary Committee, and served as a fellow/law clerk for Senate leadership. Additionally, David has worked for the Justice Department on two occasions, including at the National Security Division and a U.S. Attorney’s Office, where as a Harvard fellow he supported a number of highly-sensitive prosecutions. David is similarly experienced in the technology and entertainment sectors, having spent time at the MPAA and drafted international film tax credit programs. Before law school, he was an award-winning Hollywood actor. David runs multiple congressional foreign policy, national security, and technology caucuses, and serves as an Oregon State Bar delegate. David holds his B.A. from UCLA, graduating with a perfect GPA after starting college at 13, and J.D. from Harvard, where he earned high honors and was among its youngest-ever graduates.