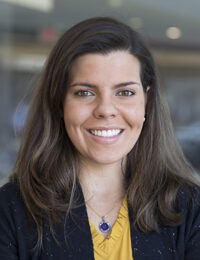 Dominique Maria Bonessi is the Maryland Reporter with WAMU 885, the local NPR affiliate in D.C. She is also a candidate for a Master’s of Arts in Global Security at American University’s School of International Service. Prior to working with WAMU, she was the City Hall Reporter with WYPR 881, the NPR affiliate in Baltimore. She covers local and state politics, Governor Larry Hogan’s administration, the role of mental health and gun violence, and courts’ handling of child custody cases when abuse is alleged. After graduating from the George Washington University in 2015 with a dual degree in Journalism and Arabic, Dominique was a Broadcast News Assistant with PBS Newshour where she worked on the foreign affairs and defense desk on on-air segments, online articles, and some field producing. Following her time at Newshour, she received a fellowship grant from the International Center for Journalists to cover the lack of mental health and educational resources for Syrian refugee children and their families in diaspora communities in Turkey. Her stories were published with PRI’s The World, NPR, USA Today, US News & World Report, The Atlantic, Religion News Service, TRT World, and others. Dominique got her start in journalism working as a senior multimedia reporter with her school paper, The GW Hatchet. Her inspiration to study journalism and issues pertaining to the Middle East stemmed from a summer abroad in Egypt in 2009 with the National Security Language Initiative for Youth.