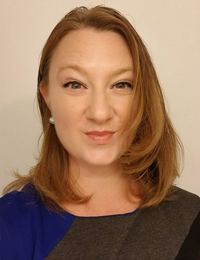 Emily Rodriguez is Communications and Advocacy Strategist at Protect Democracy. Previously, she served as communications director for the Bertelsmann Foundation, a German think tank in Washington, DC, which shares transatlantic perspectives on global challenges. In addition to making sure that her colleagues’ documentaries, reports, and opinion pieces got into the hands of journalists and policymakers, Emily played a key role in managing the think tank’s democracy portfolio. She was a producer for their video and podcast series How to Fix Democracy, and led the drafting of their Six Steps: Recommendations for Building Resilient Democracy in the 21st Century. Before joining the Bertelsmann Foundation in 2018, Emily spent three years with the National Democratic Institute for International Affairs (NDI), where she was senior government relations and communications manager, and press lead on several election missions across the globe. Previously she was based out of Philadelphia and worked in domestic politics, strategic communications, and organized labor for almost a decade. She has trained activists and observed elections in Ecuador, El Salvador, Ghana, Lebanon, Liberia, Nigeria, Turkey, and Zimbabwe. Fluent in Spanish, French, and Italian (and working on German and Turkish), the Pennsylvania native’s love for language and culture began in Venezuela, where she lived as a teenager. She holds a master’s degree in international development from Sciences Po Paris and a bachelor’s degree from American University’s School of International Service. Emily has been a political partner with the Truman National Security Project since 2013.