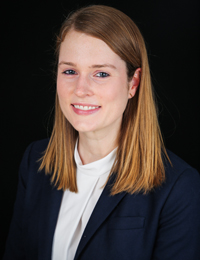 Cate Sadler serves as the Europe and Eurasia Policy Analyst on the Senate Foreign Relations Committee under Chairman Jim Risch (R-ID). In this role, Cate supports the Professional Staff Member, advises the Chairman and majority Members on political and economic developments in Europe and Central Asia, and drafts briefs, reports, legislation, and op-eds for the Chairman. Prior to joining the Committee, Cate served as the Congressional Advisor for Foreign and Security Policy at the British Embassy in Washington. In this role, Cate coordinated high-level engagement between Congress, the Ambassador, and visitors from London and advised the UK Government on opportunities to strengthen the UK-US relationship through Congress. During this time, she served as a member of the team that successfully advocated for passage of the CLOUD Act, paving the way for bilateral agreements between the US and partner countries that would give foreign law enforcements’ access to data held by US companies. For this work, she received the UK Foreign and Commonwealth Office’s 2018 Sir Nicholas Browne Award for Policy and Expertise. Previously, she held positions as a Senior Legislative Assistant to former Congressman Ander Crenshaw (R-FL) and the Deputy Finance Director for the McCollum for Governor Campaign in Florida. Cate received her Bachelor of Arts degree in Psychology with minors in Spanish and marketing from Duke University in Durham, North Carolina and a Master’s of Science in Politics and Government in the European Union from the London School of Economics. She grew up in Jacksonville, Florida and currently lives in Washington, DC.