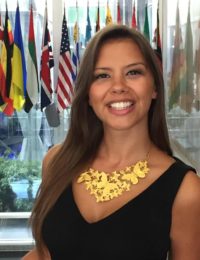 Heather Wild-Gonzalez Rubio has worked at the U.S. Department of State for over a decade in a number of offices and capacities. She has previously worked for the Deputy Security of State and worked there during the transition. She has served in the Bureau of Population Refugees Migration where she worked on the Syrian team addressing the Syrian refugee and humanitarian crisis. Miss Wild also worked in the Office of Trafficking in Persons (TIP) where she worked on the annual TIP report and has also worked in the Secretary’s Office of Global Youth Issues, the Bureau of European Affairs Front Office, and in the Bureau of International Narcotics and Law Enforcement (INL) where she covered Haiti, Dominican Republican, Cuba, and Jamaica. While working in INL, she worked on Haiti pre and post the 2010 earth quake. She is a proud native New Yorker, where she was mostly raised. Miss Wild’s mother is from Colombia and father is from Switzerland and she was raised between Mexico, Colombia, London, and New York and has lived in a number of other countries overseas. She is very active person with lots of energy, locally she is involved with a few NGOS and founded a nonprofit that provides services to victims of domestic violence in Washington DC. She is a Stephen M. Kellen five-year term member with the Council on Foreign Relations, a national security fellow with Truman National Security Project, an active member of Women of Color Advancing Peace and Security, and of the Young Professionals in Foreign Policy, and a U.S. Spain Council Young Leaders alum.